Starting from an Aesthetic

I read a book once that talked about tapping into a universal repository for the life experiences of all life, everywhere in the galaxy.


In this book they called it "the void which binds". A poet in the novel explained that when writing just flowed out of you, it's because you were tapping into that void.


I think everyone who writes has experienced that rush of words...when the story seems to pour out of you, unbidden. I don't know where it comes from...but it's magical and wonderful and mysterious.


I try to tap into it, with music or photographs I shoot...anything that creates an aesthetic. I create a single moment in my mind, a snapshot of the world and space that the story will take place, and then it just flows from there.


Here are some of my "tools", maybe they will spark something out there in the interwebs...that is nice, and pretty...not goatse. <-- do not google this.

And here are some pictures I dun did take:

Posted by Claire Callway at 13:53 No comments:


The numerical bookends to a life, detailing nothing of the life itself.


Well sir, I don't like it. So here's an attempt at a better picture of who she was, and who she was to me:


My Grandmother, Bergie, was born to two survivors of the Armenian Genocide (Serpouhi, and Asadour), and was met by an older brother Berj (who she was named after). Soon after she was born, they moved to northern Syria, to a small town named Keorkeuna, a place my Grandmother still considered her home, even at 92 years old.


She moved all over Syria as a child, from tiny Ekizoloukh, to Homs, to Aleppo, and then to Lebanon to attend boarding school at 9 years old.

How could my tiny, sweet Grandma have done and seen all of those fabulous, exotic things? She baked cookies, sewed dresses, and planted marigolds in the sun on the mountain in Hamilton, Ontario!


...As a young child I struggled to equate the two disparate lives, but as I grew older and watched her, it began to make sense. My Grandmother, with the energy of someone half her age, who tramped through the woods at the cottage well into her 80s, dragging tree limbs off the paths, moving dozens of rocks up from the beach to decorate her beloved garden...Somewhere in there I could see the wild tomboy from the mountains of Syria. 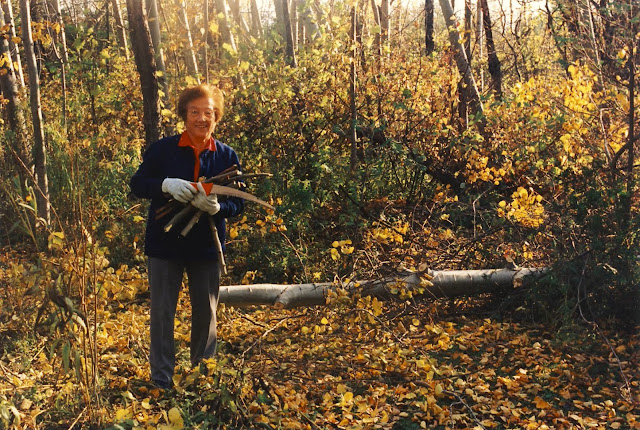 Every visit would invariably include tea and cookies, and of course, telling stories. She was the master of giving context. There was no such thing as a short story. To tell a story, you needed a backstory of everyone involved, a description of the setting, the weather on the day, and maybe even what was had for lunch before the story took place.


Some people may have seen the ramblings of an octogenarian, but she told her stories, and I was captivated. The simplest of stories became a rich tapestry of human experience. Her memory for names and faces and details was astonishing. It started an obsession for storytelling in me. Maybe it lead me to my passion for writing and telling stories? I hope it did. I'd like to be able to carry on a tradition that stems from some of my fondest memories of her.


In the 1940s, as war raged all through the region, my Grandfather was stationed along the Turkey-Syria boarder, and asked to stop smugglers...quite a tall order. Looking for a Protestant church in the area led him to my Great-Grandfather's church in Ekizoloukh, where the two developed a great friendship over games of chess...one day Asadour's beautiful daughter Berjouhi came home from where she was teaching in Beirut, and well...the rest is history. 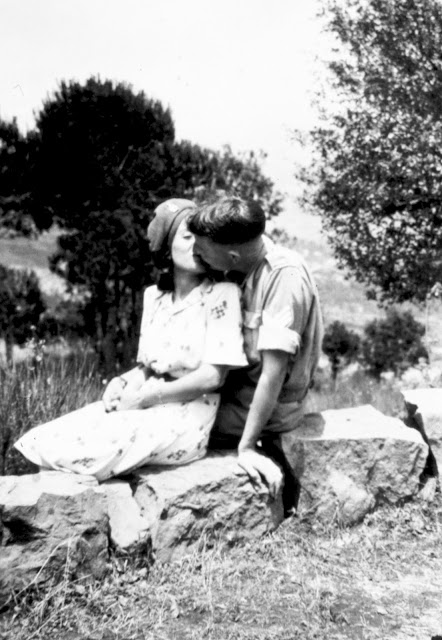 They moved to Jerusalem, where Bergie survived extensive burns after being caught in an explosion in their army barracks. Thankfully, being a soldier's wife, she had access to medical care, and most importantly, penicillin. In 1946, they moved to Grampa's hometown of London, England, where they lived upstairs from his Aunt Elsie...despite proximity to an...overbearing relative, these were some of my Grandmother's fondest years (...even if she had to leave her silk stockings and shoes in Syria, as she often lamented)...

My aunt Caroline was born a few years later, but due to the housing shortage following the war, and the effects of the pea soup smogs on my aunt and my grandfather's lungs, they decided to follow aunt Elsie to Canada.


Both trained to be teachers, my grandparents arrived after corresponding with the Ancaster school board, to discover that the board had only invited them (from EUROPE) for an interview... in a panic they accepted the only position available...in Upsala, Ontario.

A town so poor, and underfunded that the last teacher had been fired for constant drunken bouts...after several months of warnings. They were offered the teachers' quarters in an attic, where nails stuck through the ceiling, and snow poured in through the cracks. Unless you grew them in the summer, and had a root cellar, there where no vegetables. They survived on the kindness of their neighbours, who often sent their own children to school with Koolaid sandwiches... regardless, my Grandmother managed to rock out like a 17th century pirate, and get scurvy...after a year, they left.


Settling in Ancaster, and living in an empty farmhouse, where my Grandmother had to fight the rats off their food, and my Grandfather walked several miles to work in his hobnail military boots to fight of feral dogs...somehow my TTC commute doesn't seem so onerous anymore...


After a year, they managed to find a rental in Hamilton, Ontario on Queen St, and soon after my father was born. 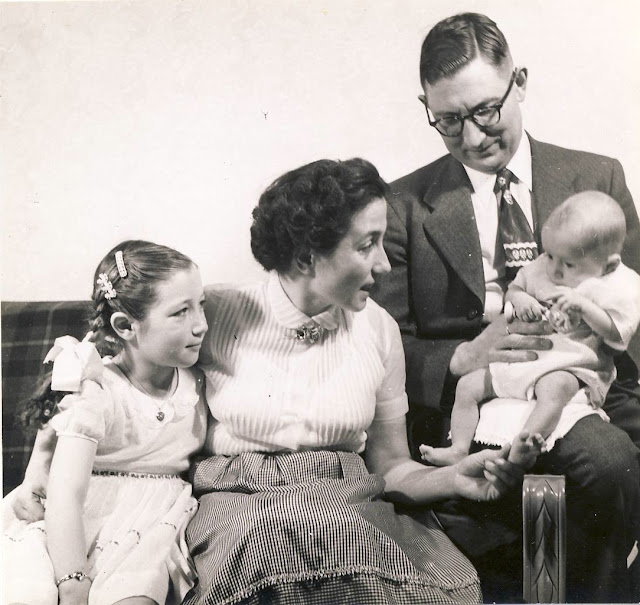 How are you supposed to list and neatly summarize the moments that make up a lifetime? There are sad moments: the premature death of 3 of her brothers and her father, the loss of her niece and nephew-in-law in a car accident, and of course, when my Grandfather was diagnosed with Alzheimer's, and his passing in 2005.


But they are overwhelmed by all the happy moments, like the birth of her children, the purchase of their first and only house, bringing her mother from Syria to live with them, a long & rewarding career teaching handicapped children, growing an absolutely beautiful garden with her husband, countless friends, travel through Europe and North America, the birth of her 3 grandchildren, retirement with her beloved husband, the purchase of the family cottage, and seeing all her grandchildren find husbands and wives of their own. 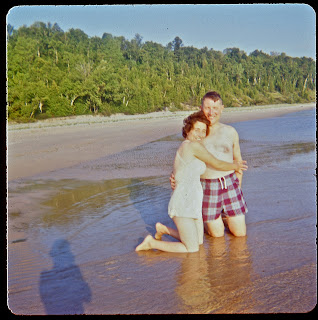 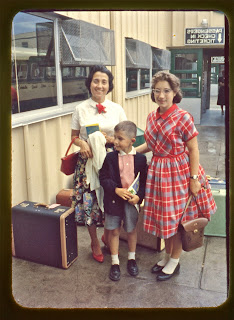 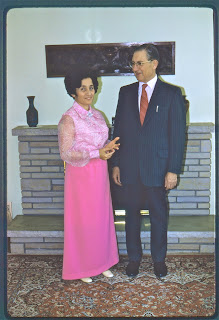 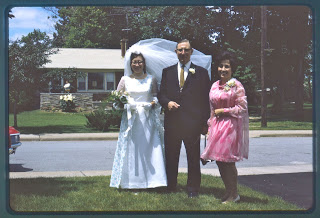 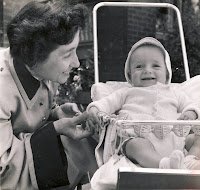 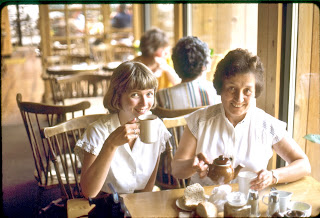 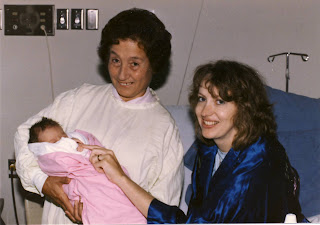 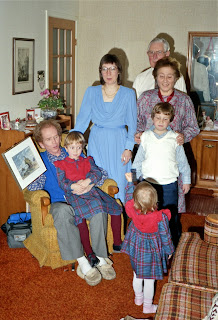 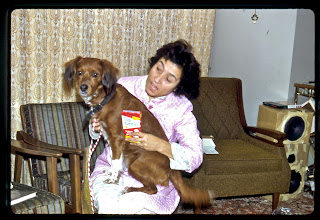 When I received the news that my Grandmother had slipped out of her coma and into nothingness on May 20th, I was at the cottage with my husband and my parents. As soon as the phone rang, I knew what had happened, and as much as I had prepared myself, I wasn't ready.

You can't be. To lose someone you love, whether they are 3 or 100, it hurts. You can never be ready for the sudden absence of someone's laugh, their smile, their stories, hell even their fussing has a place in your heart. 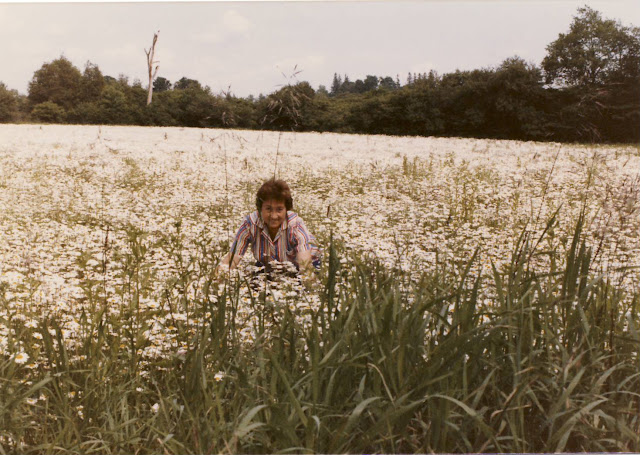 I cried. Long and hard. And I'm crying now, and I suspect there will be more tears for a good many years. I'm crying for all the things we'll never share together, all the cups of tea I'll have to drink alone, for all the stories that she forgot to tell me, for all the gardening tips I'll never hear, for her love, and my love for her that feels...lost.

She left us peacefully, after a long and wonderful life...and while it doesn't make it ok, it makes the unbearable bearable... If only just. 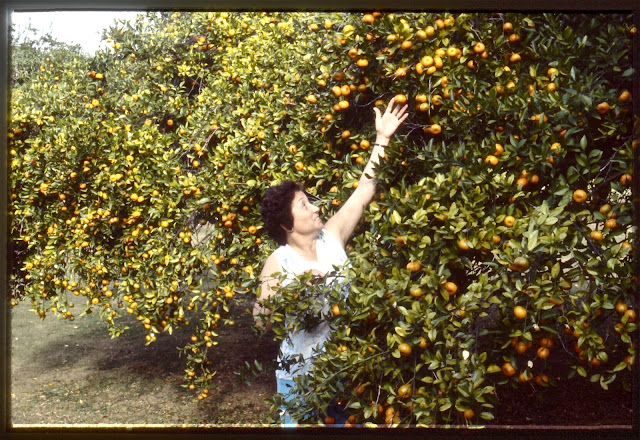 All I have of her is memories, and for now, that will have to be enough. And one day, when I have grandchildren of my own, I can try to be as wonderful a grandmother to them as she was to me and my cousins. I'll teach them to read, and cook with them, bake cookies, sing, garden, tuck them in at night, fuss over how much string & tape parcels need, and tell them stories about my Grandma Bergie, who lived a long, long time ago, who loved, was loved, and is loved still. 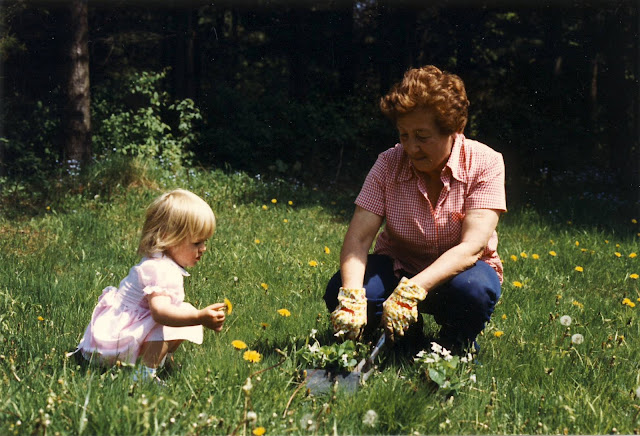 Posted by Claire Callway at 14:22 No comments:

How do I love thee, TNG?


Let me count the ways: 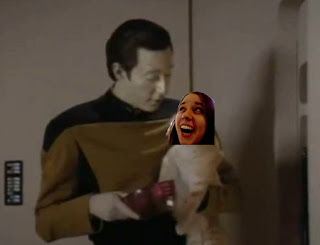 Now, GIVE ME CUDDLES! 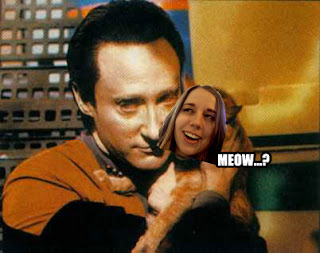 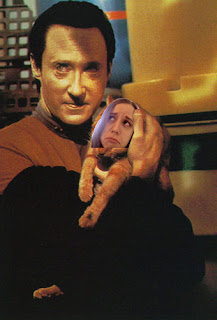 But even lovely Mandroids go astray and make bad decisions...

But he always saves me Spot from Worf, so he's still 'aight, yo. 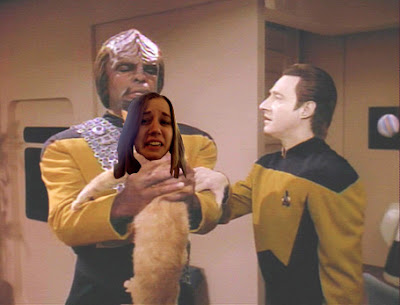 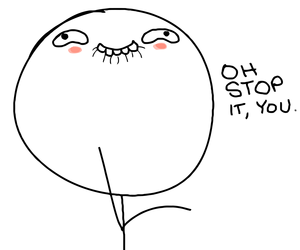 Oh Picard, you're so delightful! 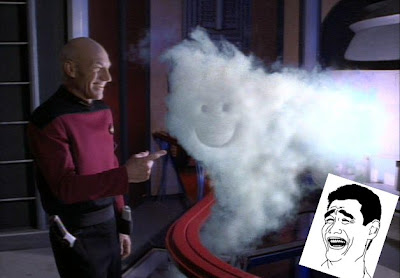 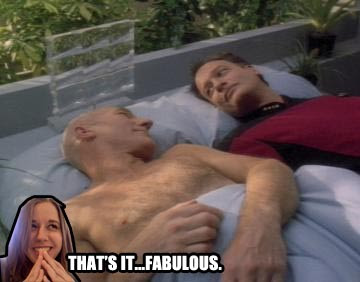 You gave me the gift of nightmares... 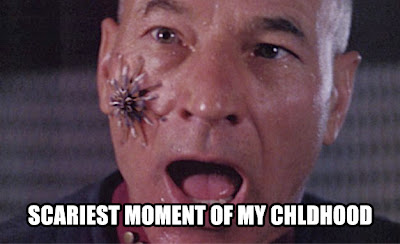 Although you have a history of making some very poor choices...

...You are a man of principals...unshakable from the truth.


You fill all four lights chambers of my heart with joy.

Look, I'm not crazy. I just love TNG. Have no fear though...I would never do this: 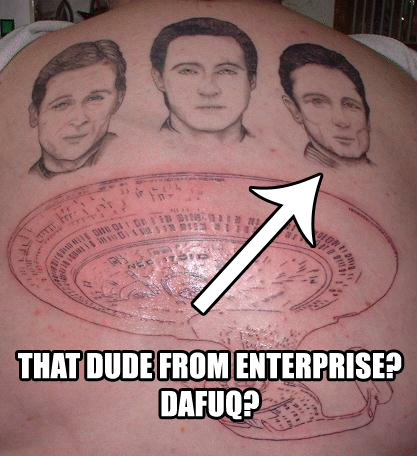 And certainly, never this tattoo: 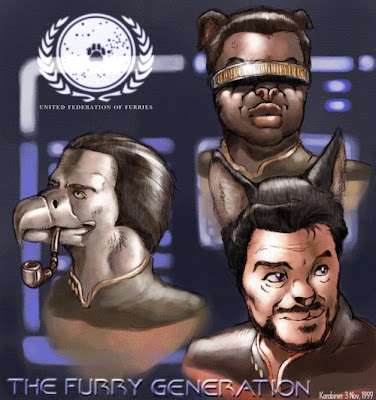 FURRIES, RUINING YOUR CHILDHOOD ONE MEMORY AT A TIME.


I shall leave you with these horrifying delightful images, and of course, a song:

Posted by Claire Callway at 14:43 No comments: